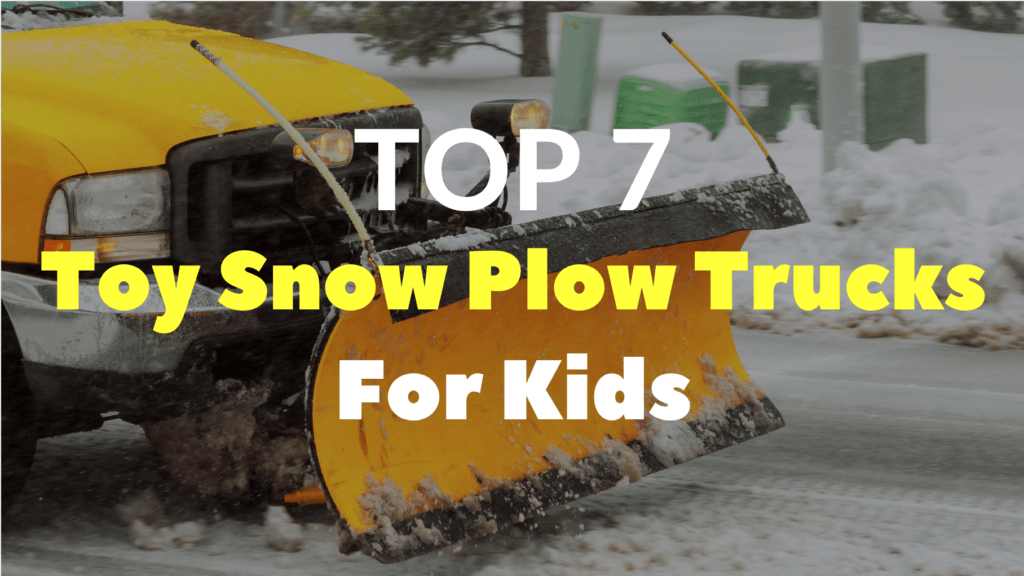 While you’re researching the different types of toy vehicles you could purchase for the kids in your life, you may have reached a point where you’re wondering if there’s anything more to choose from than your everyday toy car or toy truck.

You search high and low but can’t quite find that perfect toy; that is, a toy that is both fun and something a child can absorb knowledge from.

An uncommon toy automobile you might not have acknowledged is a snowplow truck.

Quite a few toys can fit the educational part of the perfect toy’s criteria but not all provide an enjoyable form of amusement like a perfect toy truck can.

While they’re all fun in their own right, the special part of snow plow trucks is how they’re a bit like an upgraded trash truck with a snowplow attached.

If you’re curious about the different parts of a snowplow truck, here is an organized list of the top 7 best snow plow trucks for kids!

Designed and built with a child’s movements in mind, this Click n’ Play snowplow truck appears in the form of a blue and yellow plastic toy truck.

Intended to encourage imaginative play in children, this toy truck is friction-powered to help your child plow through snowy weather.

Due to being friction-powered, it won’t require batteries to move around.

This toy is recommended for children 3-years-old and up.

R. Fleming decided to get a gift for their nephew, being in awe over the rarity of snowplow truck toys…

“You can take the plow off if you want and open and close the compartments in the back. It goes on its own for quite a distance when you pull back on it and then let go. Happy with my purchase!”

Unfortunately, not all reviewers are as pleased with their purchases and often take on the mindset of how you get what you pay for.

Matthew B., for example, states…

“it’s also much lighter/cheaper feeling than a Germany Bruder or Ertl truck but you get what you pay for.”

In general, snowplow trucks are a rarity among rarities.

When it comes to alternatives, they’re often far and in between but that doesn’t mean they don’t exist at all!

With a body painted in a warm, carrot orange color, this Bruder snow plow truck is one to notice.

Like other Bruder trucks, it’s made of ABS plastic and uses rubber tires.

With a silo container that can be opened for the storing of sand and salt alike while spreading the material about with its spreader mechanism.

This toy is recommended for children about 3-years-old to 7-years-old.

With a detailed review of his purchase, user MATTHEW N. gives the product praise while not being blind to its flaws…

“The snowplow is a very fun toy with working parts. One of the best features is that it spreads salt through the back. We have several toys from Bruder and they are unique. My son loves the snowplow. The toy is made of plastic and is not unbreakable, so keep that in mind when deciding if you should buy it for your child.”

As his review continues, he notes how the plow pops off and where the truck can be played with…

“The plow can fall off but is easily put back on. The truck also works better on a hard floor or surface outside, as if it is pushed on a carpet the plow catches and it will not move forward.”

Due to being a Bruder toy and a snowplow truck, the closest choices for it are already in this list.

For Bruder toys, one of their biggest functions is that they’re intended to be built to last.

Another feature for the brand is that they want their trucks – even though they may just be toys – to be as realistic and entertaining as possible.

For the Bruder 02825 MACK truck, Bruder follows its goal to create a lifelike experience for your child, bringing to life a blue and yellow construction truck with a snowplow attached to its front.

Other features for this truck include its light and sound module combined with a trough that can tip with the touch of a finger.

Because of the small parts offered attached to the toy, it isn’t recommended for children under 3-years-old.

User Aps purchased it as a gift for their 6-year-old son, soon following with a comment of how this Bruder toy truck is worth the buy.

“The really cool thing is that the plow detaches from the truck and you can reattach to other Bruder trucks. He [Aps’ son] puts it on his Bruder crane and 18-wheeler. He actually went out and plowed about 1″ of snow on our driveway and sidewalk right after he got it. This was a definite score!”

Like with the snowplow trucks before it, finding the perfect alternative for the Bruder 02825 MACK Granite Dump Truck is much easier said than done.

While there are similar enough options to be considered alternatives within this list, finding alternatives outside the list is quite a bit of a challenge!

While not the closest alternative to a truck with a snowplow, this Bruder truck is overall very similar in layout and features to the Bruder 02825 MACK Granite Dump Truck with Snow Plow Blade.

This toy is not recommended for children at least 3-years-old.

Rather than being a toy focused on shoveling real snow, the LEGO City Snowplow Truck is one that takes things in a different direction, relying more on imagination and creativity.

While not something to strengthen the physical movement for your child, working with pieces such as those found in LEGO parts can improve motor skills and their sense of engineering items together.

For buyers of LEGO products, their reviews are often positive and impressive. For the LEGO City Snowplow Truck, its reviews are no different.

“This was not too difficult for my 5-year-old to assemble with a little help. Now that it is together, he has been having fun playing with it assembled, so the fun goes beyond just building it.”

For LEGO toys, other options are typically best found in other LEGO products!

A bulldozer isn’t quite in the same ballpark as a snowplow when it comes to alternative toy choices.

However, this toy is about as close as you could bring yourself to be the LEGO snowplow truck with its shoveling capabilities.

If this toy catches your interest, it’s recommended for children at least 5-years-old.

The Bruder MB Arocs Snow Plow Truck has a pivoting snowplow blade, which is a bit different from the other toy trucks on this list.

Rather than have a blade that simply moves in a straight or set angled path, this blade can shift as needed.

Like many other Bruder products, the cab doors can be open as a way to enhance the realistic design of the toy.

“I bought this truck for my 3-year-old boy and he loves it. The truck was much larger than I expected,”

Begins the review of user Rev1216. Impressed by the intricate detail of the truck, they also go to mention how…

“There are a couple [of] little parts that will break easily if you allow your child to be rough with it. There are small flags on the plow that break easy. Also, the ladder on the back can break if your child pulls real hard on it.”

Still, that isn’t meant to deter you from considering this toy, as Rev1216 ends their review with positive reinforcement:

“I supervise my boy with it and just don’t allow him to smash it hard. That being said, he plays with this thing nonstop. It is a very quality toy.”

Nothing quite fits as perfect for an alternative as a Bruder does for another Bruder product.

Still, there are a couple of choices close enough to be considered a possible extra choice for a new toy you could get your child.

BeebeeRun 4-in-1 DIY with Forklift, Snowplow, Bulldozer, and Steamroller

A cheaper toy in price, this toy is a jack-of-all-trades in the options available for its attachment pieces.

If you’re interested in the idea of construction toys mixed with a more affordable price, this one may be up your alley!

An orange snowplow truck (but also available in other colors!), this Playmaker Toys snow truck is built as a simplistic truck with a pivoting snowplow.

Made of mostly plastic, some metal parts, and rubber tires, this is a more affordable snowplow truck compared to many others.

It’s recommended for children 3-months-old and up.

With a son wanting to imitate his dad, Rieb16 bought him a snowplow truck because his dad had a real one.

“Ever since we received it, he hasn’t put it down. He takes it everywhere he goes. The pullback action works great on our hardwood floors. And it’s cool how the plow piece swivels side to side. This toy was exactly what my son wanted.”

Other reviewers, however, such as one particular anonymous user, mention how the…

“only drawback is that the plow does pop right off. Did so the first time he used it. Was fixable with a dab of superglue. Since then has been fine.”

Unfortunately for this Playmaker Toys snowplow truck, the closest alternative is already in this list and not a new product.

Despite appearances, it’s more like the LEGO snowplow truck compared to others.

Through its preview is displayed as having a light brown body, this is a body you would have to put together and paint yourself.

With 103 pieces, this truck is a part of a modeling kit.

Because of its small parts, it isn’t recommended unless your child is at least 8-years-old.

For most buyers of this modeling kit, they praise the design of the truck.

An anonymous Amazon customer comments on how they’re

“no professional model builder. I have built probably 10 or so in my life. This truck popped up when I was searching Amazon for who knows what and I thought it looked cool so I bought it.”

With the help of their son, they painted the truck a gray tone and were pleased with the results.

Because of just how specific the Revell GMC Pickup model kit is, it, unfortunately, doesn’t have any other toy products similar enough to it to be considered alternatives.

Whether it’s a friction-powered toy snowplow truck or one you put together by hand, these are trucks that work great as a way of helping your child develop their motor skills and movement (so long as they can push it around anyway!).

Another plus is showing them the power of a truck and what a snowplow can do to clean up an environment filled with snow.

They may often not look too different from other trucks but that doesn’t mean they don’t pack a punch!

While a snowplow truck can resemble trash trucks, they both end up being two entirely different vehicles.

Snowplow trucks, while appearing simple in design, are a rarity among toy trucks.

You may not know exactly what toy truck or car to get your child.

If you’re stuck in a rut, it may be worth the purchase to think about getting a snowplow truck.

Other Great Toys For Kids: