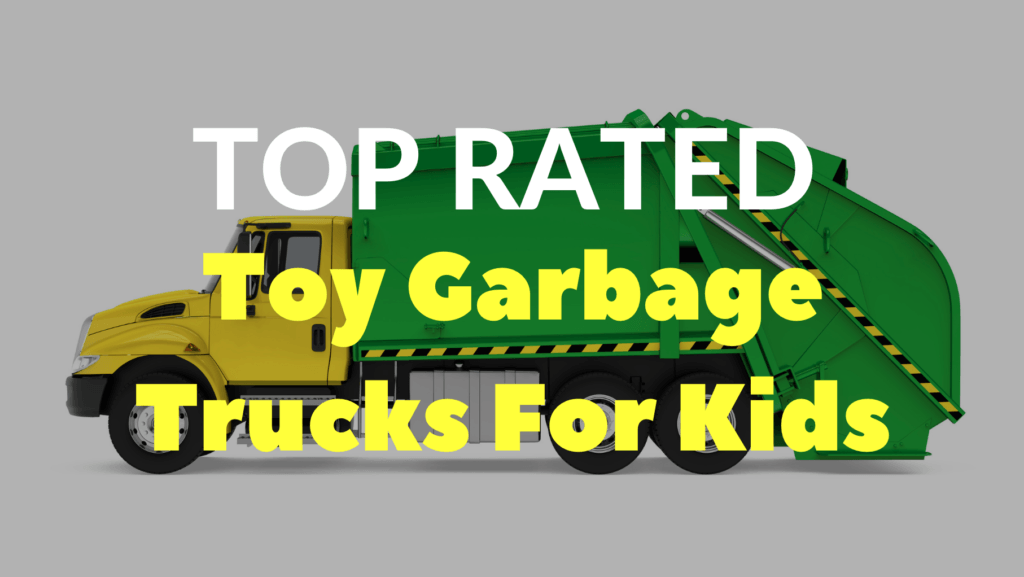 Are you unsure of what gift to give the younger members of your family?

Whether they’re your children, your nieces or nephews, your grandkids, or even the neighbor’s child you help babysit, gifts even to the youngest of kids need to be well-thought-out and worth the purchase.

If you’re contemplating the thought of gifting them a toy but aren’t sure where to start, consider something that works as both a fun toy and a decent learning experience.

For a toy that’s not only entertaining to children but also a way to teach your kids about cleaning up the environment, toy garbage trucks make for great gifts.

Designed with a dusty orange color, the FUBARBAR Toy Model Garbage Truck has been created with intricate parts.

Built with a 160-degree trailer fork on the front of its model and attached to a blue trash can, this truck can lift items and drop them into its storage compartment.

Last but not least, the rear of this garbage truck has a lockable door for the removal of items within the truck!

This toy is recommended for children 6-month-old and up.

With a very positive opinion on FUBARBAR’s toy garbage truck, Amazon user Lucy had countless praise for the purchase…

“My son absolutely loves this sanitation truck. Not battery operated which is nice. Not plastic, not cheaply made at all. Amazing details, comes with a garbage can, available in two other colors, and not bulky. Perfect size for carrying (as my 4 year tends to do).”

Ending the review, she also notes how the seller even provided a thank you note for the purchase.

The FUBARBAR Toy Model Garbage Truck may not be exactly what you’re wanting in a model garbage truck.

If you’re aiming for an alternative toy that isn’t quite the FUBARBAR toy, here are some other options…

Designed with a green-colored body to represent recycling, this Tonka toy garbage truck is a perfect option similar to the FUBARBAR toy.

With the extra ability to emit light and sound, this truck is similar to the FUBARBAR toy in how it can lift items in front of it with its lift.

This toy is recommended for children ages 3-years-old and up.

With a green body and yellow trash compartment, the Bruder Man TGS garbage truck is a rear-loading trash truck.

Though they don’t come with the toy, it’s also capable of having light and sound modules installed to enhance the experience.

With the toy garbage truck, however, includes two garbage cans.

For Cindy Gleason, she bought this toy truck for her grandson as a present. With a 5-star review on the toy, she adds:

“Best toy ever. We use dried lima & pinto beads as the garbage and they work great in the truck & cans. At 2 years old developed scooping & pouring skills. Learned how to turn crank which improved his motor skills. We got some old GI Joe bendable men and they fit perfect in the cab.”

If you’re aiming for an alternative toy, toys found under the Bruder brand are generally the next best choice.

If you’re after a very similar truck with a different color, this Bruder alternative is just about that with a white and orange color scheme instead of green and yellow colors.

As a recycling truck with a white body and a dark teal trash compartment, the Amazon-exclusive Matchbox Garbage Truck comes with sounds, lights, and a lever to lift the arm of the truck.

When you’re done loading trash into the truck, you can also unload trash through its rear hatches.

The recommended age for this toy is 3-years-old to 7-years-old.

When describing the mechanics of the truck and how it was a gift for their child, MakeMePancakes describes their experience with the product:

The toy isn’t without critique, however, as MakeMePancakes notes how the product came with only one trashcan created specifically for the Amazon-exclusive Matchbox Toy Garbage Truck.

“It would be nice if we can buy more trash cans that work with this garbage truck, but my son had managed to make the Bruder trash cans work alright. We have a bunch of those and they are sold separately.”

If you want an alternative side-loading garbage truck, finding alternatives isn’t always going to be easy.

A much more affordable alternative to the Amazon garbage truck is the Playkidiz alternative.

Designed as a side-loading garbage truck, this toy is a simpler and cheaper choice for you to consider.

It’s designed for children three-months-old and up.

Described as a friction-powered garbage truck, this WolVol-branded toy truck follows its namesake by allowing the toy truck to move based upon the friction caused when it’s rolled.

By rolling the truck, your child can then let the truck move a bit on its own as well.

Along with its friction-powered functions, the truck also emits sounds and lights to enhance its design.

A button on its side allows the back to lift for trash dumping.

The toy is recommended for children up to 6-years-old.

After purchasing the toy garbage truck, Rosie Brastrom notes how pleased she was with her purchase:

“I bought this for my 3-year-old niece who loves trucks and cars! She picked it out herself on my Amazon account :’) it arrived quickly and well packaged. The truck is a good size and there aren’t any sharp edges.”

If the friction-powered toy garbage truck was not what you were searching for, your options may, unfortunately, be fairly limited.

Painted in green, this friction-powered toy truck is one of the closest alternatives to the WoVol toy garbage truck.

This toy is recommended for children ranging between 3 to 6-years-old but reviewers comment on how it can be too hard on younger children.

A white and orange garbage truck, the Dickie Toys Large Action Garbage Truck has a moving fork with a dustbin and tipping trailer.

This toy garbage is also equipped with lights and sound effects to help give your children a more immersive experience.

Fond of the product, Nisha’s review on the toy is as follows:

“This has been an excellent garbage truck toy! Surprisingly, the forks are rather sturdy and have held up to a lot of play. Unlike my son’s other garbage truck, the back of this one opens up to unload effortlessly (a HUGE plus if they need to play by themselves for a bit). The sounds are a little loud for our liking, but it’s about on par with most kids’ toys. The lights are fun and flash great in the dark.”

With the possible alternative toy choices for the Dickie Toys Large Action Garbage Truck, many everyday toy garbage trucks can be considered.

Much like with the FUBARBAR toy garbage truck, the Tonka Mighty Motorized Garbage FFP Truck is a great choice for a toy similar to the Dickie Toys Large Action Garbage Truck.

With a green, recycle-based design, the Liberty Imports Powered Recycling Toy Truck is a side-loading and back-dump garbage truck.

To add to that, it’s also friction-powered in its movements.

This toy is recommended for children 3-years-old or older.

While D. Jones is happy with their purchase, they mention how the truck, while well-made, definitely isn’t perfect.

“This is a great concept and is the only garbage truck I’ve found that actually empties the garbage like a real garbage truck. The only reason for a lower rating is it only works about half the time. When it doesn’t work it shoots the garbage can across the room. When it does work, it dumps it right in the hole on top.”

Another side-loading truck within this list, it shares alternatives with some trucks here.

With a dark ruby and green color scheme, this Bruder-branded toy truck is a higher-end toy garbage truck.

With a lifting mechanism on the back of the truck, it’s capable of dumping items from attachable trashcans into its trash compartment.

To create a more believable design for the truck design, its treaded tires are made of a rubber-like material.

It’s also able to be equipped with a light and sound module or a plow blade, both of which are sold separately from the toy.

This toy is intended for your kids if they’re around the ages of 3 to 15-years-old.

Leaving a very positive review of the product, user RW is more than pleased with their purchase of this Bruder toy garbage truck for their son, commenting on how

“he just absolutely loves it.”

Their review also comments on the design and function of the product.

“It’s big and just absolutely beautiful and detailed. Most importantly, it’s functional and durable. Even though we have had it for 6 months, it looks brand new. Nothing is broken even though he runs it into walls and is not gentle with any of the moving parts.”

Similar to the Bruder 02812 Mack Granite Garbage Truck, this Bruder product is realistic in design and works much like it in its overall functions.

It’s recommended for children around 3 to 10-years-old.

If you’re digging through countless toys and aren’t quite sure what to gift a child, you’ve searched for that perfect toy as a present.

Even though toys can be a bit difficult to sift through, toys such as model garbage trucks make for great gifts.

Since it functions well as a form of entertainment for your kids, you also help with their coordination and aid them in learning about the importance of cleaning up after themselves.

For a gift with multiple positive functions, what else could you search for in a toy?

The next time you’re searching for a present for the younger ones in your life, maybe a model garbage truck toy is the way to go!