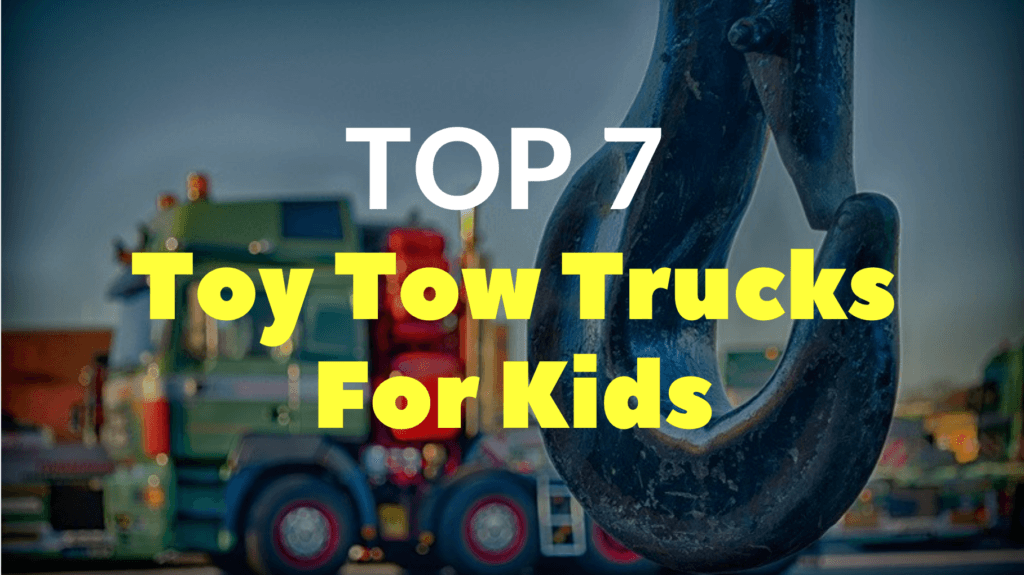 When you’re traveling down the road with your kid (or kids!) in tow, they take in the sights around them to learn about the world.

The first thing they typically notice, of course, are other vehicles around your own.

They observe these other vehicles and may even become fascinated by how they work and why they do what they do.

To teach your younger family members about the world while giving them a form of entertainment, consider the thought of gifting them a toy tow truck.

Why, you ask, should you consider getting a toy tow truck?

While you’re not only allowing the children in your life to learn about how a vehicle is moved without being driven, you’re also giving them the chance to develop their hand-eye coordination.

Whether it’s through manually pushing the toy truck themselves to learning how to control an RC toy vehicle, these toys’ goals are meant to let your children have fun while learning along the way.

If the idea of bringing that perfect toy tow truck home is to your liking, here’s a straightforward list for the top 7 best toy tow trucks for kids…

This WolVol-branded toy tow truck carries a blue color tone in its appearance. Attached to it are two hooks for your child’s car-towing needs.

Added to this is the friction-powered movement the toy truck comes with.

This toy is recommended for children 3-years-old and up.

Wanting to purchase a gift for her 3-year-old son, Rebecca De La Torre turned toward the WolVol toy tow truck.

Her review of the toy and her son’s opinion of it were very positive.

“Exactly what I was looking for. My son wanted a ‘blue tow truck with two hooks’ like one in one of his books. He loves this truck!

I love having a quiet toy that is sturdy – he’s broken plastic hooks on many of his toys trying to hook things so I really love that these hooks are metal.”

However, for a specific, similar toy, there is one similar in appearance and design!

This toy tow truck is very similar to the WolVol toy in both design and color choice.

In its appearance, the WolVol toy tow truck takes on a dark blue color while the Liberty Imports toy tow truck uses a lower saturated blue.

Both are designed with two hooks at the back of the truck and with friction-powered movement.

The Liberty Imports toy truck, however, comes with both lights and sounds to add an extra effect not found in the WolVol-branded toy.

This toy is intended for children 3-years-old and older, much like the WolVol toy tow truck.

Built to be higher quality, this toy tow truck uses stationary plastic hooks located at the rear of the vehicle for the towing of other automobiles.

For this toy, it’s recommended age range is children 3-years-old and up.

“A smaller Tonka. Strong build, even though there are plastic parts. We’ve had this almost a year. My four-year-old son uses it daily in his construction business. It’s been through the wringer!!!! No signs of wear and tear!!!”

The most similar alternatives to the Tonka Steel Retro Tow Truck happen to be those under the Tonka brand.

Featuring both lights and sounds, this Tonka toy tow truck is a combination of blue and silver.

Rather than a stationary plastic hook, this tow truck comes with a crane and hook for towing.

For its appearance, the Dickie Toys toy tow truck uses a yellow and orange palette for color.

When it comes to what this toy is capable of, there’s a black extension piece near the back wheels used to pull a separate vehicle along.

Separately from this is a black-corded cargo net you manually wrap on the vehicle needing to be towed.

After attaching the cargo net to the crane of the toy tow truck, buttons found on the sides and top of the truck can be pumped to lift and lower the lifted automobile.

Vehicles needing to be towed can also be pushed into the flatbed of the tow truck as it’s tilted into a makeshift ramp.

This toy is recommended for children around 3-years-old to 6-years-old.

With overwhelming praise, she was surprised at how well-made the toy was…

“My 2-year-old nephew absolutely LOVES this tow truck!! It is HUGE!! I was not expecting it to be almost 3 feet long, but it is. I was pleasantly surprised at his reaction.”

Typically with alternatives, there’s at least one choice available that works well enough as a separate or backup option.

For this Dickie Toys tow truck, however, the only alternative is more-or-less an alternative color to the aforementioned toy.

This toy is essentially the same as the one listed above, albeit with red and dark gray colors.

Like the original Dickie Toys tow truck listed before, the recommended age for this toy is 3-years-old to 6-years-old.

A golden yellow-colored RC – or remote-controlled – toy tow truck, this Mercedes-Benz officially licensed toy is different from many toys found in this list.

Using a controller, your child would be able to electronically control the various functions found in this toy tow truck.

“I was a little hesitant given the cost, but it was well worth it! This was by far the hit of Christmas morning with both of our boys (and the hubby)!” When it came to the functions of the toy, she added, “the controls were easy to work and the truck performed as described. It’s a good size and has a nice weight to it.”

Due to being a Mercedes-Benz officially licensed toy and an RC toy tow truck, there aren’t any alternatives similar enough to this toy.

A red (or blue!) tow truck designed like a monster truck, the Max Tow Truck Turbo is intended to be a heavyweight towing vehicle.

With a turbo mode, Max can take off. The toy also comes with a sound feature.

KAK loved purchasing this toy, as it made their 4-year-old and 7-year-old grandchildren happy.

“There are toys every kid thinks they want, but doesn’t get used after the 15 minutes of Oohs and Ahs, this was not one of those toys. Faster than expected when pulling lightweight.” They follow their review with some critique on the toy because of its sound. “The only negative – it’s kinda loud and never stops talking; a volume control would be a plus for the grandparents and parents of the owners.”

You may be wanting something different in appearance or maybe your child would prefer something based on a movie they like.

Similar to the Max Tow Truck Turbo, there is also a towing vehicle based on Mater from the Cars animated movie franchise.

If you were interested in the Max Tow Truck but the design wasn’t winning you over, perhaps a truck based on the character Mater from Cars would be more appealing.

The Mater towing truck is also recommended for children around 6 to 9-years-old.

Bringing out the big guns, Bruder is a brand that prides itself on being a very high quality, German-made toy vehicle brand.

Designed with a yellow body, the Bruder 02750 MAN TGA towing truck makes use of features similar to those found in the Dickie Toys Air Pump Tow Truck Vehicle (albeit without the pumping button feature and with knobs instead).

It also has steering movement and is described in its description as a cross-country vehicle.

The recommended age for this toy is at least 3-years-old.

DDirk purchased this Bruder-branded toy as a Christmas gift for grandchildren.

Pleased with the product, the review talks about how the trucks…

“are made to be played with! They are built with a strong plastic that holds up well.” When describing the truck, they mention the following: “This truck is a bigger truck witch makes it fun to use your imagination with and towing other trucks!”

Though a similar alternative is a bit hard to come across, there is, in fact, a tow truck also by Bruder that works as a backup choice.

Being priced at over $100, this alternative to the Bruder 02750 is certainly not cheap.

This towing truck has doors you can open along with including the light and sound module a lot of Bruder automobiles are compatible with but sold separately from.

Rather than having a Jeep, this tow truck comes with a red roadster sports car.

A bit of a cheaper alternative to the other Tonka item within this list, this tow truck is yellow and black in appearance with a yellow hook attached to its crane.

Overall, its appearance and functions are nice and simplistic as a towing truck.

While Ashley B’s son fell in love with his new toy tow truck, she was not as happy with the purchase as he was for one reason: the lack of steel despite being labeled as such.

“I bought this toy because it is described as ‘a steel truck that will last forever.’ To my complete disappointment, it’s all plastic!”

Overall, reviewers are pleased with the toy aside from the misleading materials.

For this Tonka tow truck, alternatives for it are already listed above.

Like with the retro Tonka tow truck, this is one of the few alternatives to the Tonka Steel Tow Truck. As noted before, it’s recommended for children at least 3-years-old.

Coming across that perfect toy tow truck can be difficult.

The prices fluctuate quite a bit and depending on your child’s personality or your budget, that can greatly influence what you’re searching for in the end.

Still, whether it’s an expensive, fancy tow truck or a more affordable and straightforward in how it functions, all toy tow trucks work well for the basic task of helping your child improve their hand/eye coordination.

If you decide to search for a toy for children who love cars and transportation alike, toy tow trucks might become their new favorite thing.