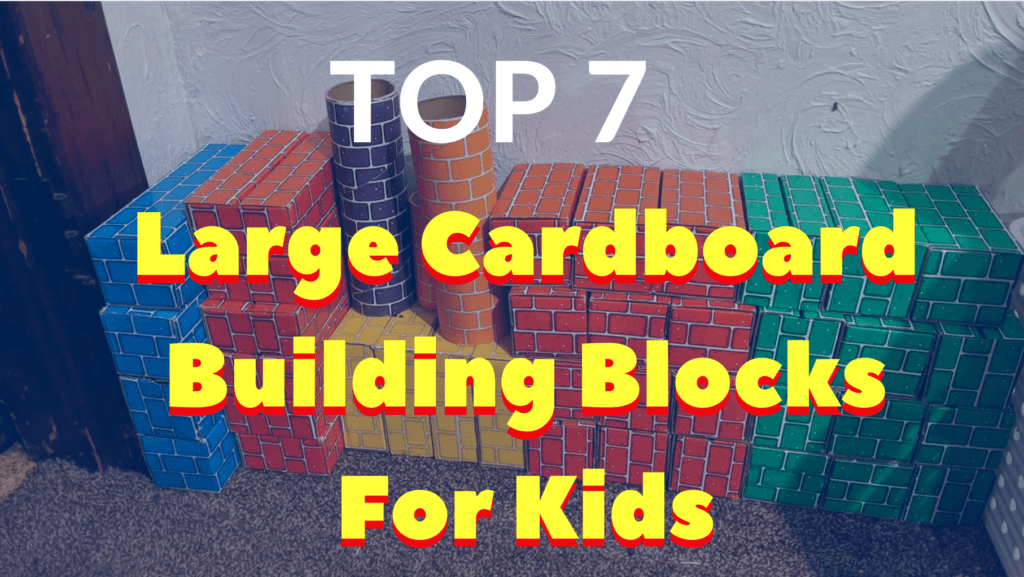 Whether it’s through the building of a structure or just to tower blocks together, building blocks are the most basic and useful toy you can give a child.

From being able to help them understand problem-solving to improving their motor skills and hand/eye coordination, these simplistic blocks are a great tool for a child’s development.

Rather than following the default scheme of gifting your child small building blocks, however, a great choice for a toy would be large cardboard building blocks!

These toys are much bigger building blocks and are required to be manually put together with adult supervision.

Despite the manual effort needed for these toys, the overall outcome is well worth the effort: giving your child a simple toy that works wonders in benefiting their physical and mental development.

If you’re interested in these toys, here is a compiled list (in no particular order!) of the top 7 best large cardboard building blocks for kids!

For the EP EXERCISE N PLAY cardboard building block set, there are 40 blocks in three sizes.

As for their appearance, these blocks are lined up in three colors: blue, green, and red.

These blocks are intended for children at least 2-months-old.

Amazon user MJ thinks of these blocks as a solid purchase, leaving 5-stars as a review:

“These blocks are much thicker than I expected. I have only put together about half of them so far and my two kids have been playing with them nonstop.”

While they express concern for not being sure as to where the blocks can be stored after being assembled, their review stays positive:

“Overall, they seem to be very durable and would be a great toy for almost any age.”

Rather than continuously repeat them in the list, the EP EXERCISE N PLAY building blocks have similar alternatives to other blocks: the Melissa & Doug Deluxe Jumbo Cardboard Blocks and the Mondo Blox Brick Block Set.

Including 10 pieces to a set, the HAPPYMATY set of blocks comes in a variety of designs depending on what you choose to purchase.

These colors are as follows: blue, gray, green, orange, red, yellow, or even animal patterns instead of brick colors.

This set is intended for children 3-years-old and older.

J. Cohen bought the red set for a unique purpose, as stated in their review:

“These are solid quality and can support a decent amount of weight when put together. I use them to frame a TV where I play a Yule log video all season long facing outside for the whole world to see :)”

User Candida purchased the yellow set and was pleased with the product as well:

“Excellent for creativity. Can’t say more than that. Classic, durable. And [the] small ones love it.”

The most similar choice for these building blocks is already listed here!

Designed to resemble wood in its faux texture, these building blocks are in a set of 40 pieces with them all sized the same.

With an appreciation for the design of the blocks, user oggi starts their review with how they look:

“so much better than the fake brick versions that are everywhere on Amazon.”

Nina Kue was also pleased with her purchase of these blocks, as mentioned in her review for them.

“These things are crazy durable! My 4 and 2 year old have beat these blocks up and there’s hardly any wear on them. We got them in March and they are still like new (BIG deal around here!) and it’s nearly August. The assembly was easy and kinda fun.”

She, like oggi, also praised their wood grain design.

For this building block set, its closest alternatives are found within the Mondo Bloxx brand along with others already listed.

As a set of 12 red cardboard bricks, the Constructive Playthings Giant Constructive Stacking Blocks are brick-like in their design along with having the same size throughout the set.

It’s recommended for children 2-years-old and up.

User NR left a clear and confident review on the building block set:

“These are easy to assemble and very fun to play. Lightweight enough that a child won’t be injured if the tower topples onto him. Tip: if you plan to give these as a gift, give them already assembled and packaged in a large storage tub, laundry hamper, etc. Something cute and large enough to hold all of the blocks.”

In a more straightforward review, Simone mentioned that it:

“takes some time to assemble but very sturdy once assembled.”

As with the Mondo Bloxx Tinder Blocks, the Constructive Playthings building blocks are closer to both items found in the list already and Mondo-branded block sets.

Whether it’s with 52 blocks or 84 blocks, the Edushape building block set comes with quite a few pieces for your child to play with.

Designed with corrugated cardboard, the blocks are yellow, red, and blue with a brick pattern covering each block’s surface.

Like many other sets, the pieces vary in size.

This building block set is recommended for children 18-months-old and up.

When it comes to Rick V’s review on the set, he’s glad that the blocks are of a decent quality.

“Right at the start, I want to make clear that these blocks appear to be good quality and sturdy. I played with similar when I was young and they were always one of my favorite toys. They do take a lot of time to fold up. I’m buying these for my first grandchild.”

His review wasn’t full of compliments for the product, however, as he did have some critique for it because of the number of blocks provided.

“The disappointment is in the number of different sizes. Of the 84 blocks, 16 are large, 16 medium and 52 small. This is not advertised *anywhere* that I was able to find, including on the Edushape website itself. I decided to take the chance anyway, but just be aware that you are buying the equivalent of 37 large blocks.”

If you’re looking high and low for other building blocks aside from the Edushape set, you aren’t likely to find sets in such large amounts.

Mentioned previously, this set works as an alternative to the Edushape blocks due to their solid brick color and a fairly large number of blocks, the Mondo Bloxx set including 40.

With brick-patterned blocks ranging from red to yellow to blue, these primary-colored building blocks are vivid, rectangular pieces as a part of a set.

There are 40 different blocks and three different sizes for the pieces: 8 large, 8 medium, and 24 small.

The pieces are made of thick cardboard.

This set is recommended for children at least 2-months-old.

Quite a few users noted a positive experience with this set. Jessica Wilson, for example, was happy with her purchase:

“I got these for my toddler and almost 1-year-old and they have played with them nonstop since opening them. Super sturdy (even with a toddler jumping from brick to brick).”

An anonymous Amazon customer also left an appreciative review on the blocks:

“Just gave these to my two boys (5 & 2) who have put them thru just about everything this past week from being light enough to build high towers with them to throw them like a grenade at each other. Much better than wood blocks because these two can get rowdy.”

Though these blocks are bright and vivid in color, there are quite a few much like them in appearance.

For other choices, you don’t have to go too far to find them!

Very similar to the Tenby Living blocks, these blocks are brick-patterned with red, blue, and yellow variants (albeit with light blue instead of dark blue).

For this alternative, they’re recommended for children at least 2-years-old.

Similar in design to the Tenby Living cardboard pieces, the Lillian Vernon Primary Building Bricks are a brick-patterned set.

Coming with 24 pieces and all of the same size, this set is made up of red, blue, yellow, and green blocks.

The manufacturer’s recommended age is 3-years-old and up.

A user going by MH bought these blocks for the classroom at their church and praises the quality of the set:

“These blocks were in my 1st grade Sunday school room years ago and the kids never got tired of them. I’m at a new church now and working with 2-4-year-old children. These are a great addition to the other donated toys.”

A handful of other reviewers mention their surprise to owning the Lillian Vernon building block set countless years ago, only to be able to still purchase them online.

Corinne Brewi is also no exception to this:

“My children played with these blocks all the time when they were young and I was really surprised to see that I could order them for my granddaughter after all these years and that they are still available from Lillian Vernon!”

Much like the Tenby Living Cardboard Building Blocks, the Lillian Vernon Primary Building Bricks are quite a bit like other cardboard building block sets.

If you’re still searching for that perfect set, here are some other choices to pick from.

Like the Tenby Living blocks, the Melissa & Doug set is a decent alternative to the Lillian Vernon blocks.

A pack of 40 blocks, this is a purely red set of brick-patterned toy blocks that are similar to the Lillian Vernon block set.

Building blocks as a whole are a great choice in helping your child develop their minds and bodies.

As a simple toy, it does much more than even what the fanciest and most expensive toys can do.

Whether it’s building forts or just stacking them in numerous piles upon piles, these larger blocks work wonders in helping your child’s motor skills and hand/eye coordination.

Larger, cardboard building blocks are no different and they’re even able to hold the weight of a child walking atop them.

If you’re interested in taking home a set of cardboard building blocks then hopefully this list helps push you in the right direction!

The next time you’re stumped on picking up a toy as a gift, large cardboard building blocks are a pretty decent idea for the young ones.